Once upon a time, in the garden of a beautiful palace, grew a marvelous flower. She was higher than any other flower in that garden and her leafs were as green as the jade stone. Her pearly petals were embracing her stamens which were looking like princesses’ golden crowns. She was said to be the most beautiful Flower in the Royal Garden.

One day, while he was taking his walk through the garden, the Prince saw the Flower and fell in love with her. And from that day on, the Prince started to spend most of his free-time with his beautiful Flower. They were happy together: he was happy because he was loved by the most beautiful Flower in the world and she was happy because she was loved by a Prince.

But the King discovered their lovestory and bacaming so infuriated that he tried in many ways to separate the Prince from his Flower. Their love was strong and resisted all of the King’s plans, but one day, the King took his final decision: the Flower had to be elimnated from his garde.

The Prince was urgently sent to a very important travel and he couldn’t bid her farewell. And the gardener received the order to take out the Flower with all of her root and then throw her in the oven’s flames. Brokenhearted, the gardener fulfilled his King’s wish.

Puzzled, the Flower started to ask many questions, but she never received at least one answer and she gave up. When the gardener hold her in his hand and passed through the palace’s gates, she finally understood her faith. But what could she do? Nothing. She could only hope and pray not to be burned.

And her prayers were listened because the mercyful gardener decided not to throw her into the oven’s flames. Instead, he started to climb the difficult road leading to the top of the mountain. He was thinking that a flower like her deserved a dignified death.

Once arrived on top, in a place known only by himself, the gardener put the Flower on a bunch of dry branches. Then, with tears in his eyes, he went back to the palace.

Realizing that if she had to stay in that place all alone she would certainly die, she started to drag herself until she found the shadow of a rock. Up there, the weather was different from the one in the garden,but under that rock, she found some water remained form the last rain, and some dirt. She stick her root in that little dirt and then fell asleep. She was so tired that she slept all night long without feeling the wind and the cold that suddenly surrounded her.

The following morning, still sleepy, the Flower saw that everything arownd her was white. It was the first snow of the year, and she was out there all alone. Feeling numb, the Flower fell asleep again.

The first rays of spring’s sun came very late the following year, but they woke up the Flower. Slowly, the first buds came out of the thin dirt. Due to the rough weather, the Flower couldn’t grew tall like the other years, but she remained small and elegant…almost royal.

The first person to see this new Flower was a shepherd. He was astonished by its beauty and its fragility. „What a beautiful flower! She’s so noble and she grew up here on this rock”, he said.

From that day on, the Flower got the name of edelweiss flower. 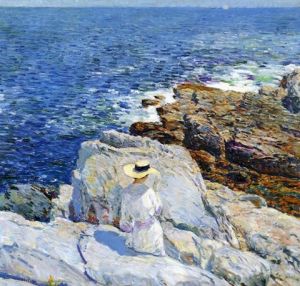